The short mat version of bowls is essentially the same as the full size game which is played both indoors and outdoors. This is a beginner's guide to the short mat game and is not intended to be a coaching session which obviously has to be done through the use of practical lessons. 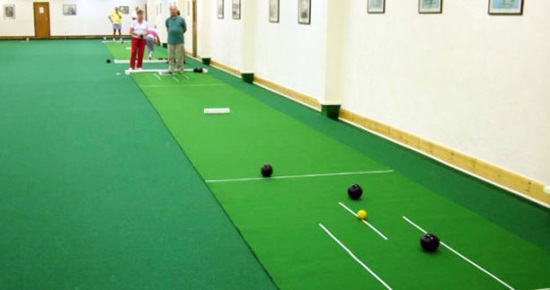 The mat on which the game is played is between 40 and 45 feet long and approximately 6 feet wide. Placed in the exact centre of the mat is a block of wood which is 15 inches long and 3 inches wide and deep.

The idea of the game is to get your bowls as close as possible to the jack, which is the yellow ball shown in the above picture.

The players stand in a pre-determined area at one end of the mat and bowl towards the jack. Players can have up to four bowls each depending upon how many people are playing. They take it in turn to bowl and the person who's bowl is nearest the jack wins the "end". The twist is that they don't just win the end, every one of their bowls that is nearer to the jack than their opponents is counted.

This can lead to a situation where one player has, for example, three bowls closest to the jack and with his/her last shot the other player gets closer to the jack, completely changing the score from three points to their opponent to one to themselves! This is where a large part of the skill of the game comes in.

In team events of three or four persons each side, the team is divided into player 1, player 2, player 3 and player 4 who is the Skip. (The boss). The skips from each side go to the end where the jack is and try to direct members of their team as to where to place their bowls. After players 1, 2 and 3 have taken a turn, the players change ends and the skips play against each other to try and either win the end, or rescue it! It is quite important to have a good player as skip for obvious reasons.

Bowls that actually touch the jack are marked with chalk and remain in play unless they leave the mat completely. These are counted in the final score.

The area which contains the jack is known as the "head" and once all players have bowled it is said that an "end" has been completed. Games usually have about 16 or 18 "ends" and take a couple of hours to play.